Overall, the Trans-siberian is a fairly comfortable train experience, but it definitely doesn’t hurt to be well-prepared. We’ve jotted down some of the things we found helpful along the way.

Sanitation isn’t exactly a top priority on the trans-siberian. There weren’t any showers on board, even on the first class cabin for the train that we took, so wet wipes became our best friend. Feeling clean, even if you aren’t actually clean, is quite important to one’s mental health on a 4-night train ride. Plus they usually have a nice baby powder smell, which is a bonus.

The toilets are also quite basic. By which i mean, it’s a hole over the tracks. Sometimes there’s a flushing mechanism and sometimes there isn’t. Your best bet is to try not to touch anything in there. Naturally, hand sanitiser becomes your second best friend. You don’t need to carry bottles of it; our little 50ml bottle easily lasted the entire trans-siberian.

The trains always have a hot water dispenser (which is also the only drinking water available) so it’s really helpful to have a cup and some coffee powder/tea bags for the trip. There is literally nothing to do except stare out of the window so having coffee/tea at regular intervals gives some ‘structure’ to your day (although with the time zone jumping, time becomes a pretty fluid concept; see earlier post for elaboration). Grocery stores in Russia often sell individual Nescafe 3-in-1 mixes near the checkout lines, which is helpful if you don’t need a 30-pack.

The only clean drinking water you’re going to get is boiling, and buying 500ml bottles from the train conductor really starts to add up. So we would cool the boiling water in our heat-proof bottle and then transfer it to a regular plastic bottle for drinking. (Of course, we were drinking nowhere close to the daily recommended amount of water because we wanted to limit our trips to the bathroom.)

The food in the restaurant car is usually pretty terrible and quite overpriced, and the restaurant usually doesn’t have enough seats. Plus the restaurant is open at odd hours because of the time zone confusion especially during the Moscow-Irkutsk leg (the train follows Moscow time even after we’ve jumped many time zones). Also, there are long periods of time when the train is parked at immigration and it’s basically a lock-down and you can’t leave your coach. For example, the immigration into Mongolia (on the Irkutsk-Ulaanbataar leg) starts right around 9pm and lasts almost 3 hours. That leaves you with cup noodles as pretty much the only food you can make with boiling water.

To be fair, the train does stop pretty often and there are little ‘cafes’ at the stations that you can pop out to. But the hot food from these places is so-so and the risk of eating something dodgy isn’t worth it. Also, the restaurant car does get slightly better along the way. The Mongolian restaurant was half-decent and the Chinese one was also not too bad, so it’s worth maybe having a meal in each restaurant for the experience.

But ultimately, the processed goodness of cup noodles is pretty undeniable.

Also, consider some easy-to-eat fruits and veg like oranges, bananas, cherry tomatoes and cucumbers. Pre-wash anything you bring because you really don’t want to be attempting to wash cherry tomatoes over the ‘sink’ in the bathroom.

5. Have some offline entertainment

I mean, how long can you stare out of a window or talk to other travellers about your home country? Bring books/a kindle and maybe even some TV shows on a laptop to get through the days. Having some TV to watch also becomes a good ‘event’ to look forward to, as a reward for all that sitting around.

7. Figure out the train schedule

On all the coaches, there is usually a train schedule pasted somewhere. It is usually not in English, and the timings can be confusing, but make the effort to figure it out. The train stops at various stations for different periods, so it is useful to plan when you can stretch your legs and/or re-stock your cookies. Also, the bathrooms are closed when the train is stopped (and sometimes for a period before and after the train is stopped). The bathrooms are also closed during immigration which can be very long (2hrs at least usually, often longer). A full bladder while trying to deal with immigration officers – not fun. 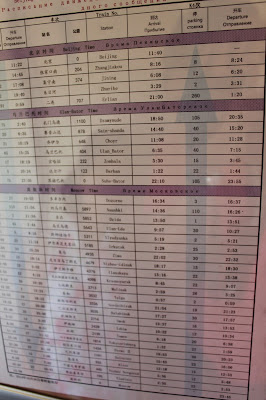 Train schedule of the Moscow-Beijing train

There aren’t that many charging points in the coach, and usually there isn’t a charging point in your compartment. So an external battery charger for your phone is handy to leave to be charged unattended. Charge your cameras, kindles, etc before getting on board.

Above all, take plenty of pictures and enjoy the journey!